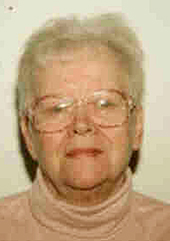 Isabelle J. Rockefeller, 93, formerly of Cape Vincent, passed away Friday morning, November 4, 2016, at Samaritan Keep Home, where she had resided since January 2007.

A calling hour will be at Cummings Funeral Service, Inc., Clayton on Wednesday, November 9, from 9:30 - 10:30AM followed by the funeral mass celebrated at St. Mary's Church, Clayton at 11AM with Rev. Arthur J. LaBaff, pastor, presiding. Burial will in in St. Vincent dePaul Cemetery, Rosiere.

Isabelle was born in Watertown on March 20, 1923, daughter of Jay and Lena Marshall Slover and she graduated from high school in Watertown. On April 30, 1941 she married Spencer J. Rockefeller and he passed June 14, 2002. She had worked as a nurse's aide at Mercy Hospital and was a communicant of St. Mary's Church.

She is survived by her son, Donald J., Watertown, five grandchildren, and several nieces, nephews, and cousins. Along with her husband, she was predeceased by her son, Richard J., and two brothers, Gerald A. and Marshall G. Slover.

Donations in Isabelle's name may be made to Samaritan Keep Home Activities Fund, 133 Pratt St., Watertown, NY 13601. Online condolences to her family may be made at www.cummingsfuneral.com.