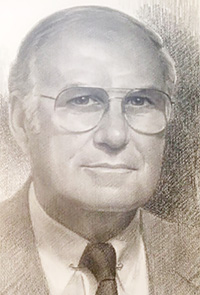 Calling hours will be held at Cummings Funeral Service, Inc., Watertown on Wednesday, November 2, from 4 - 7PM. The funeral mass will be celebrated at St. Anthony's Church on Thursday, November 3, at 11AM with Msgr. Robert A. Aucoin, pastor, presiding. Burial will follow in Glenwood Cemetery.

Peter was born in New York City on December 10, 1923, son of Peter and Maria Belli Fazio Sr.. The family moved to Watertown in 1927 and Peter graduated from Watertown High School in 1941.

He entered the US Army on January 19, 1943. He served in the South Pacific, Guadalcanal, Philippines, and Luzon and received the World War II Victory and Asiatic Pacific Middle Eastern Medals. On December 17, 1945 he was honorably discharged.

Upon his return to Watertown, Peter worked at St. Regis Paper Mill, Deferiet. From 1950 to 1963, he owned and operated N. Y. Grocery on Arsenal St. On May 26, 1956 he married Rosemary Tauroney at St. Anthony's Church with Rev. Anthony Milia officiating. After selling the grocery, he began his career with WWNY TV. He began in Sales and after 23 years of service to the station, he retired as Advertising Sales Manager.

Peter was a communicant of St. Anthony's Church. He was a member of the Elks Lodge 496, Italian American Club, and Northside Improvement League. He enjoyed sports and was an avid fan of the Yankees, NY Giants, and Syracuse Orangemen. He also enjoyed walking and golf.

In lieu of flowers, the family wishes donations in his name be made to either St. Anthony's Church, 850 Arsenal St. or Hospice of Jefferson County, 1398 Gotham St., both in Watertown, NY 13601. Online condolences to his family may be made at www.cummingsfuneral.com.

#9 Patti Trainham 2016-11-03 18:00
Susan and family,
So sorry to hear of the passing of your dad. Our thoughts and prayer to you and your family.
Jack and Patti and family

I was saddened to hear about the loss of your loved one, but I am grateful that Mr. Fazio no longer has to suffer, and I know that he is in a much better place!

:"Do Not let your hearts be troubled. Trust in God; trust also in me. in my Father's house are many rooms; if it were not so, I would have told you. I am going there to prepare a place for you. And if I go and prepare a place for you, I will come back and take you to be with me that you also may be where I am. (John 14:1-3)
Report to administrator
#2 Lucy Hiotis 2016-10-29 06:20
I have such fond memories of this sweet man. I'm so grateful to God that he lived such a long and happy life, but realize how very much he will be misssd. I send my love and deepest condolences to his wonderful family. You all will be on my mind and in my prayers
Report to administrator
#1 Steve & Yvonne Gebo 2016-10-28 23:51
sue & Toy any family we are so sorry for your loss. Our prayers and thoughts are with all of you today
And in the weeks to come..
Sending our love
Report to administrator
Refresh comments list