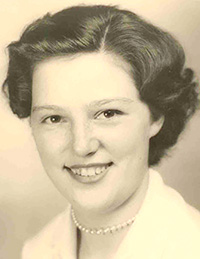 Calling hours will be held at Cummings Funeral Service, Inc., Watertown on Sunday, October 30, from 2 - 4PM. The funeral service will be at the funeral home on Monday, October 31, at 11AM with Rev. Steven Murray, pastor of Holy Family Church, presiding and burial will be in Glenwood Cemetery.

Donations in her name may be made to either Hospice of Jefferson County, 1398 Gotham St. or Holy Family Church, 129 Winthrop St., both in Watertown, NY 13601. Online condolences to her family may be made at www.cummingsfuneral.com.