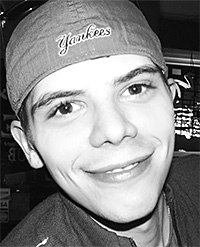 Michael T. Webster, 29, passed away at his home in Watertown on Tuesday morning, October 18, 2016, cared for by his loving family and Hospice of Jefferson County.

Calling hours will be held at Cummings Funeral Service, Inc., Watertown on Thursday, October 20, from 3:30 - 6:30PM with a service at the funeral home following the calling hours at 7PM with Rev. Fred G. Garry, First Presbyterian Church, presiding.

Michael was born in Watertown on August 7, 1987, son of Emmett L. and Maretta L. Robinson Webster. He attended schools in the South Jefferson and Watertown districts. He enjoyed woodworking, cooking, golf, music, and writing. He also enjoyed baseball and was a Yankee's fan. His greatest love was spending time with his family.

Along with his parents, Emmett and Maretta, with whom he lived, Michael is survived by his three sisters, Christine Roberts and her wife, Crystal, Watertown, Sarah Webster and companion, Josh Johnston, Alexandria Bay, and Amanda Chamberlain and husband, Eric, Watertown; several aunts and uncles; and two nephews and two nieces, Tyller, Jacob, Aurora, and Eleanor. He was predeceased by his nephew, Dyllon.

Michael will be remembered as an inspiration to all.

Donations in his name may be made to St. Jude's Children's Research Hospital, 501 St. Jude Place, Memphis, TN 38105. Online condolences to Michael's family may be made at www.cummingsfuneral.com.