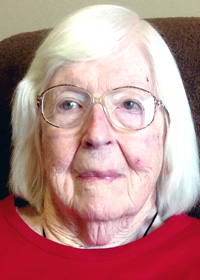 A graveside service will be held on Saturday, October 22, at 2 p.m., in Omar Cemetery with Rev. Earl LaLone presiding. The public is invited to attend. There will be no calling hours. A celebration of Mrs. Shaw’s life will follow the service at the home of Mr. and Mrs. Mark and Sandra Constance in Redwood, NY.

Mrs. Shaw was born in Alexandria Bay on October 1, 1925, daughter of Lewis and Irene Maxson Stewart. She was a 1943 graduate of Theresa High School. On November 12, 1943, she married Adrian E. Shaw at Asbury United Methodist Church, Watertown, with Rev. Albert Abbott officiating. They were married for 65 years before Mr. Shaw’s death on March 21, 2009.

During World War II she worked for F. N. Burt Co. and Faichney's Thermometers in Watertown. After the war, she worked with her husband at John's Service Station and Cabins in Alexandria Bay for 16 years. They later owned and operated Shaw's Texaco Service Station and Souvenir Gift Shop from 1962 until 1999. She was a member of the Clayton United Methodist Church.

Donations in her name may be made to Clayton United Methodist Church or the charity of your choice. Arrangements are with Cummings Funeral Service, Inc., Clayton and online condolences may be made at www.cummingsfuneral.com.