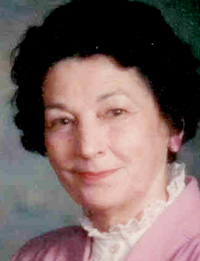 A funeral mass will be celebrated at Our Lady of the Sacred Heart Church on Monday, December 10, at 11AM with Rev. John Yonkovig, pastor of St. Agnes Church, Lake Placid, and Rev. Richard Kennedy co-officiating. There will be no calling hours and arrangements are with Cummings Funeral Service, Inc., Watertown.

She had worked for a short time as a clerk and stenographer for the Corp of Engineers in Washington DC and for the American Red Cross Disaster Services, Alexandria, VA. Mary Lou was a homemaker and a volunteer at Mercy Hospital. She had attended Our Lady of the Sacred Heart Church, a former member of its Altar & Rosary Society, and a former director of religious education.

Donations in her name may be made to either Our Lady of the Sacred Heart Church, 320 W. Lynde St. or Hospice of Jefferson County, 1398 Gotham St., both in Watertown, NY 13601.