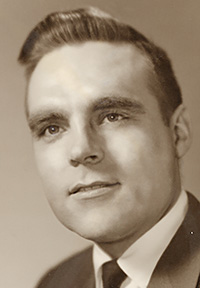 Calling hours will be held at Cummings Funeral Service, Inc., Watertown on Sunday, September 18, from 2 - 4PM. A prayer service will be at the funeral home on Monday, September 19, at 9:15AM followed by the funeral mass celebrated at St. Patrick's Church, Watertown at 10AM with Msgr. Robert Aucoin presiding. Burial will be in Glenwood Cemetery.

Noel was born in Watertown on December 17, 1927, son of Gerald J. and Ellen "Nell" Farrell Coughlin. He was a 1946 graduate of Immaculate Heart Academy.

On March 13, 1946 he entered the US Army and was a member of the First Detachment Second Signal Service Battalion. He received the World War II Victory Medal and was honorably discharged as a Private on April 30, 1947.

After the Army, Noel worked as a field representative for Stebbins Engineering and Manufacturing Co., Watertown for ten years. He then was an insurance marketer for NY Casualty in Watertown and Clifton Park, retiring after 38 years in 1992. He had been a communicant of St. Patrick's Church, a member of Elks Lodge 496, Watertown, and a member of the Knights of Columbus in Crescent. He was a member of the Society of Certified Insurance Counselors Emeritus and the American Legion in Half Moon. In 1968 the couple moved to Syracuse, to Clifton Park in 1970, and returned to Watertown September 1995.

Donations in his name may be made to either Immaculate Heart Central School, 1318 Ives St. or Sisters of St. Joseph, 1425 Washington St., both in Watertown, NY 13601. Online condolences to Noel's family may be made at www.cummingsfuneral.com.