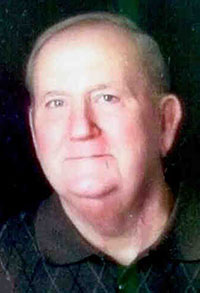 The funeral service will be held at Cummings Funeral Service, Inc., Watertown on Monday, August 1, at 1PM with Dan Klebes, of Indian River Baptist Church, presiding. There will be no calling hours.

Bob was born in Watertown on June 30, 1942, son of Hector H. and Sarah G. Wager Graveline. He graduated from Sackets Harbor High School and studied architectural design at Jefferson BOCES. He served honorably in the US Navy from May 18, 1960 to June 19, 1963.

On February 12, 1975 he married Carol A. Weise at First United Methodist Church, Watertown.

He was a self-employed truck driver, working for F. B. G. Transport and was based out of Watertown. Bob was a former member of the Adams VFW and the Northside Improvement League. He enjoyed hunting, fishing, and especially his time with his many grandchildren. He took pride in giving each and every one of his children and grandchildren unique nick-names that often stuck. He proudly taught each grandchild his fine art of picking their noses, and his love of the "jeans beans, the magical fruit" song. He held a life long love relationship with doughnuts. His sense of humor and dedication to his family will be missed.

Donations in his name may be made to the Black River Ambulance Squad, P. O. Box 314, Black River, NY 13612. Online condolences to Bob's family may be made at www.cummingsfuneral.com.

#3 Mary Kerr 2016-07-28 15:03
Scott and family,. From our family to yours, we are so very sorry for the loss of your dad. Grandkids will be telling stories about him for years to come. Take comfort in that. Thinking of you. Mary
Report to administrator
#2 Donald Buckbee 2016-07-28 10:38
I'm very sorry for your loss
Report to administrator
#1 Susie Pilon Lentz 2016-07-27 21:53
Carol and Family,
Our deepest sympathy to you and your family with Bobs passing. He was a very nice man and Dad and him had some great stories and fun times during their "Pistol camp" hunting days in Barnes Corners. Bob will be deeply missed by all. Susie Pilon Lentz and the Pilon family
Report to administrator
Refresh comments list