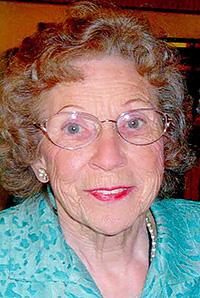 Virginia Purcell, 86, entered into her eternal rest on Tuesday morning, July 19, 2016, at her home in Clayton in the presence of her loving family.

Calling hours will be held at Cummings Funeral Service, Inc., Clayton on Sunday, July 24, from 2 - 5PM. The funeral service will be at the Clayton United Methodist Church on Monday, July 25, at 11AM with Pastor Earl J. LaLone presiding followed by burial in Clayton Cemetery.

She was born May 29, 1930 to Winfield and Reta Scott in the Graystone Inn, Clayton Center. She attended the one-room schoolhouse in Clayton Center and graduated from Clayton High School in 1948.

Virginia was employed at Graves Pharmacy in Clayton before becoming a full-time homemaker. Later she was employed as a cafeteria worker at Thousand Islands High School for ten years. She was a member of the Clayton United Methodist Church and worked on many church projects, including managing the local food pantry. She also volunteered her time to support many non-profit organizations. Virginia served as Treasurer of the Clayton Fireman's Auxiliary from 1965 - 2011, achieving life-time membership. As a member of the auxiliary, she was very active in the Booster Club. Virginia was a former member of the Order of the Eastern Star.

In recognition of her dedication to the Clayton community, she and her husband were the honored recipients of the 1997 Citizens of the Year Award. Virginia enjoyed gardening, baking, and playing cards with family and friends. Besides being a devoted wife and mother, she adored her grandchildren and great grandchildren. Family meant the world to her!

Donations in Virginia's name may be made to either the Clayton United Methodist Church, 324 John St. or Clayton Council of Churches Food Pantry, c/o St. Mary's Church, 521 James St., both in Clayton, NY 13624. Online condolences to her family may be made at www.cummingsfuneral.com.