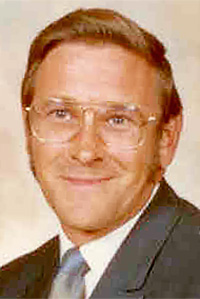 Calling hours will be held at Cummings Funeral Service, Inc., Watertown on Wednesday, July 20, from 4 - 7PM. The funeral mass will be celebrated on Thursday, July 21, at 10AM at St. Mary's Church, Evans Mills with Rev. Christopher Looby, pastor, presiding and burial will follow in Omar Cemetery.

On December 11, 1952 he entered the US Air Force. He received the National Defense Service and Good Conduct Medals and was honorably discharged on September 10, 1956.

Mr. Bertrand was a teacher and former administrator for 29 years, lastly working for the Indian River School District in Evans Mills. He retired July 1, 1988. He was a communicant of St. Mary's Church and a member of the Indian River Lions Club, both in Evans Mills. He enjoyed volunteering for various social organizations, including Office of the Aging. He also enjoyed golfing, and fishing, and had a love of football and basketball, his favorite school being Syracuse University.

Donations in his name may be made to Hospice of Jefferson County, 1398 Gotham St., Watertown, NY 13601, St. Jude's Children's Research Hospital, 313 Washington St., Suite 310, Newton, MA 02458 or St. Anne's Shrine, http://www.saintannesshrine.org/. Online condolences to Jim's family may be made at www.cummingsfuneral.com.