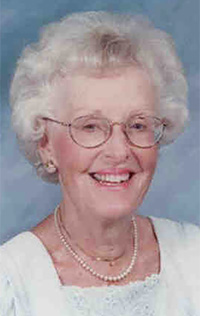 At her request a memorial service will be held at First Presbyterian Church at a time and date to be announced with burial to follow in Brookside Cemetery. Arrangements are entrusted with Cummings Funeral Service, Inc., Watertown.

Lois was born in Alexandria Bay on September 26, 1926, daughter of James I. and Amy B. Wells Mallen. She attended schools in Alexandria Bay and graduated from Morrisburg (Ontario, Canada) Collegiate Institute.

She was a Stenographer for the Jefferson County Clerk's Office, working in the automobile bureau from 1947 - 1962. But most of her life, she enjoyed being very active with her family and her life. Lois was a member and Deacon of First Presbyterian Church, member of United Presbyterian Women Organization, and played the hand bells for the church well into the 2000's.

Because of her athletic parents and her mother's love of golf, Lois began playing at age 12. Between 1947 - 1986 she won a record eighteen women's city golf championships, receiving her last at age 59. She also had placed as runner-up twelve times. She was a member of Watertown Golf Club and Ives Hill Country Club and once moving to the retirement community in 2008, enjoyed watching the golfers from her apartment. She was very active with the Miss New York State Pageant when it was held in Watertown. Lois was a member of the Republican Women's Club, where she had held office, Jefferson County Historical Society, the Samaritan Medical Center Auxiliary, where she volunteered in the gift shop and delivered mail, and the Order of the Eastern Star. She also was a member of Lyric Theatre and Morning Musicals. Lois enjoyed playing with Watertown's Duplicate Bridge Club and just playing bridge with her friends, especially after a round of 18 holes. From 1945 until the mid 1970's, she was a member of several local bowling leagues that also traveled for tournaments after winning their local divisions.

She is survived by her daughter, Amy G. Gill, Roanoke, VA, son, James R. Galloway, Charlotte, NC, and two grandchildren, Evan B. Gill, Blacksburg, VA and Lauren E. Gill, Roanoke, VA. Lois is also survived by her brother, Richard I. Mallen, age 97, who resides in Roanoke, VA. He was formerly of Alexandria Bay and Morrisburg, Ontario, where he was known as Dick Mallen. Several nieces, nephews and cousins also survive.

Donations in her name may be made to Hospice of Jefferson County, 1398 Gotham St., Watertown, NY 13601. Online condolences to her family may be made at www.cummingsfuneral.com.