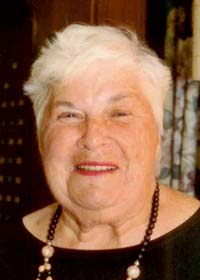 Frances Exley Brown, 83, Washington Island, Clayton, passed away Tuesday evening, December 4, 2012, at River Hospital, Alexandria Bay where she had been a patient since November 16.

Calling hours will be held at Cummings Funeral Service, Inc., 214 Sterling St., Watertown, on Friday, December 7, from 4 - 7PM. The funeral service will be at the funeral home in Watertown on Saturday, December 8, at 9AM with Rev. Dr. Jerome Wichelns, pastor of Christ Episcopal Church, Clayton, officiating with burial following in Brookside Cemetery, Watertown.

Mrs. Brown was born in Watertown on March 28, 1929, daughter of Earl E. and Charlotte M. Merkley Exley. She graduated from Watertown High School and had attended Hunter College and graduated from Paine Hall Medical School with a laboratory technologist's degree, both in NYC.

She was a laboratory technologist at Mt. Vernon Hospital, Mt. Vernon, a laboratory supervisor at E. J. Noble Hospital, Alexandria Bay, and a lab consultant at E. J. Noble Hospital, Gouverneur. She was a member of the Board of Directors of River Hospital and was instrumental in the planning and development of the Irwin B. Brown Antwerp Health Center. Frances was a member of Antwerp Chapter 189 Order of the Eastern Star and had served as a member of the Thousand Islands Central School Board of Education. In 1993 she was named Cape Vincent Citizen of the Year, actively participating in the Cape Vincent Improvement League and the Thousand Islands Craft School, Clayton. She was an avid antique collector, loved to cook, had a love of arts and crafts, and a special, strong love for the St. Lawrence River.