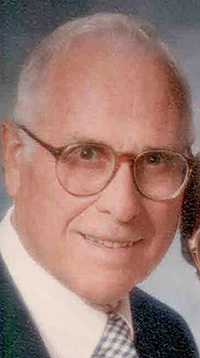 Medford W. Schnauber, 95, formerly of Watertown, passed away Friday morning, June 17, 2016, at The Crossings Nursing and Rehab Center, Minoa where he had been a resident for five years.

The funeral service will be held at Cummings Funeral Service, Inc., 320 John St., Clayton on Saturday, July 2, at 10AM with Rev. Leon "Toby" Schilling presiding. Burial in Redwood Cemetery will follow the service. A picnic in celebration of Medford's life will be held at Grass Point State Park following the services.

Medford was born in Clayton on March 2, 1921, son of Vernet and Harriet Robinson Schnauber and he was a graduate of Clayton High School.

On January 13, 1943 he enlisted in the US Army. He received the Good Conduct, American Theater Service, and WWII Victory medals and was honorably discharged as a Sergeant on February 21, 1946. While serving in the Army he married Bette Jones on March 6, 1943 at the First United Methodist Church, Gainesville, FL. Mrs. Schnauber passed on January 10, 2008.

For 43 years he worked at NY Air Brake, retiring in March 1983 as a machinist. He had been a member of the First United Methodist Church, Watertown.

In lieu of flowers donations in his name may be made to either First United Methodist Church, 236 Mullin St., Watertown, NY 13601 or Donation Processing, Michael J. Fox Foundation, P.O. Box 5014, Hagerstown, MD 21741-5014. Online condolences to his family may be made at www.cummingsfuneral.com.