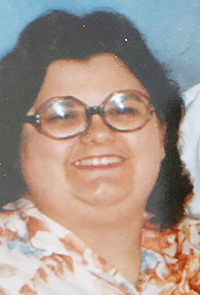 Calling hours will be held at Cummings Funeral Service, Inc., Watertown on Tuesday, June 21, from noon - 2PM with the funeral service following at 2:30PM at the funeral home with Pastor Earl Reff, Fellowship Baptist Church, presiding. Burial will be Monday, June 27, at 3PM in Depauville Cemetery.

Virginia was born in Clayton on August 10, 1950, daughter of Howard and Lois Besaw Slate. She married Roger A. Schafer, Sr. on October 26, 1969 and he passed on September 15, 2005. She was a homemaker and also provided child care for many families.

She is survived by her three children, Penny D. Schafer and fiancée, Elijah Person, Roger A. "Bam" and Brenda L. Schafer, Jr., and Lorie L. and James Buchanan, all of Watertown; her "adopted" daughter Lisa and Billy Gleason and "adopted" son, Robert Wagoner, both of Watertown; sixteen grandchildren and nine great grandchildren; her goddaughter, Ebony Newell and her family; two sisters, Marie Humphrey, Clayton and Yvonne and Phil Marra, Watertown; and numerous nieces, nephews, and cousins. Her parents and husband predeceased her, and also one great grandson, Raymond Mehaffy, brother and his wife, Donald and Laverne Slate, and sister, Arlene Tracy.

Donations in Virginia's name may be made to Hospice of Jefferson County, 1398 Gotham St., Watertown, NY 13601. Online condolences to her family may be made at www.cummingsfuneral.com.