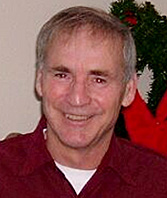 A memorial mass will be celebrated on Saturday, June 25, at 11AM at St. Mary's Church, Clayton with Rev. Arthur J. LaBaff, pastor, presiding. There will be no calling hours and arrangements are entrusted with Cummings Funeral Service, Inc., Clayton.

Tom was born in Alexandria Bay on January 24, 1944, son of T. Jerome and Margaret LaLonde Brabant and he graduated from Clayton High School. He married Dianne M Burns at St. Mary's Church on June 29, 1963 with Msgr. Dennis Lynch officiating.

On May 31, 1962 he entered the US Air Force. He served in Colorado, Texas, and the Philippines as an electrician. Tom received the small arms, expert marksmanship ribbon and was honorably discharged as an Airman First Class on April 27, 1966.

After his discharge the couple moved to Rochester where he began his career with Rochester Telephone. He worked as a cable splicer and repairman and retired in 1995. He and his wife then returned to Clayton.

Tom was a communicant of St. Mary's Church. He was a Bishop Conroy General Assembly 4th Degree Knights of Columbus and a member of Knights of Columbus Clayton Council 350. He was a current member of American Legion Colon-Couch Post 821 and a former member of both Tri County Pistol Team, NRA Distinguished Expert, and Genesee Pilots Association. Tom greatly enjoyed flying his 1950 Cessna 170A. He also enjoyed hunting, woodworking, engraving, and with his brother, Bernard "Barney", making cannons. He especially loved his time with his family and friends.

Donations in his name may be made to Cpl. William A. Brabant Scholarship at Jefferson Community College, 1220 Coffeen St., Watertown, NY 13601. Online condolences to Tom's family may be made at www.cummingsfuneral.com.