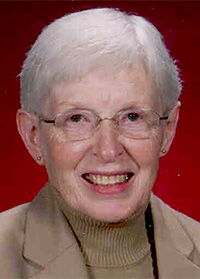 Janet M. Stewart, 84, Ives Hill Retirement Community, Watertown, passed away at Hospice of Jefferson County on the morning of June 9, 2016, after a long illness.

On April 15, 1954, she married Charles A. Stewart at St. James Episcopal Church in Theresa, NY, with the Reverend Frederick Haworth presiding.

She was predeceased by her parents, a brother, John McMurray, Franklin, PA, and her sister, Margaret Bloomquist, Kenmore, NY.

The family would like to express its gratitude to the staffs of Samaritan Medical Center and Hospice of Jefferson County for their thoughtful care and consideration.

In lieu of flowers, please make a donation to Hospice of Jefferson County, 1398 Gotham Street, Watertown, NY 13601 or to the charity of your choice. Online condolences to Janet's family may be made at www.cummingsfuneral.com.

12
#14 FML Genealogy Dept. 2016-06-15 15:13
From all of the staff and volunteers of the Genealogy
Dept., our sympathies to the family of Janet Stewart.
She was always willing to help people and give them
guidance to find their ancestors. She was an
inspiration to those of us who had the pleasure of
knowing and working with her.

Report to administrator
#13 Dick Boyce 2016-06-14 11:22
My thoughts and prayers are with you in this difficult time. As a young teacher Jan was a role model to emulate. I'll always remember her dignity and above all her kindness.
Report to administrator
#12 Marty Morrison 2016-06-14 10:58
Kevin, sorry to learn of the death of your mother. I remember her as my teacher in high school and always thought she was a little picky about grammar and writing styles. Turns out these were valuable lessons as I now proof read documents on a regular basis and have the same attitude about writing styles and grammar. You don't always realize when you are in school who were the teachers that influenced you most, but as an adult I would say she was certainly one of the good ones. My condolences to the entire family. Remember the happy times and they will help you through these difficult times.
Report to administrator
#11 Bill and Lucy Skye 2016-06-13 23:24
To the Family of Jan Stewart: Sorry for your loss. Jan was a great teacher and person. Bill Skye (former Assist. principal of WHS) and Lucy Skye
Report to administrator
#10 Jackie Thomas-Eustis 2016-06-13 21:15
Dear Mr. Stewart, Karen, Cindy, and Kevin,
I'm very sorry to hear of your Mom's passing. She was very kind as all of you were to me, and I send prayers of peace and healing......
Blessings to all,
Jackie Thomas-Eustis
Formerly of Gotham St
Report to administrator
#9 Cynde Miller 2016-06-13 12:04
Mrs. Stewart was a wonderful teacher and mentor. She always told me I would go on to lead a colorful life! Rest in peace with the angels.
Report to administrator
#8 Martha Millard Jacks 2016-06-13 10:19
My sympathies to your whole family.
Report to administrator
#7 Joan Blance Gregory 2016-06-13 09:49
What an amazing woman. Smart, funny, strong, she made a wonderful role model for all fortunate enough to
have been in her class. My thoughts and prayer go out to her family.
Report to administrator
#6 jim mcvean 2016-06-12 18:02
I'm so sorry for your loss stewart family. She was a great women and teacher. In the classroom and outside as I grew up with kevin. I will miss her.
Report to administrator
#5 Dorothy Haney 2016-06-12 16:54
So sorry to hear of Mrs. Stewart's passing...she was my English teacher in high school (class of '73) and one of my favorites! She made me appreciate the language and my children were forever grateful for my knowledge when it came to proofreading their papers throughout their high school and college years. My prayers are with her family...
Report to administrator
12
Refresh comments list