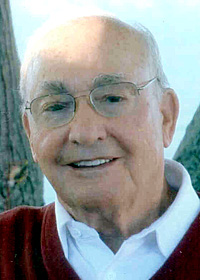 Calling hours will be held at Cummings Funeral Service, Inc., Watertown, on Tuesday, December 4, from 3 - 7PM. A prayer service will be at the funeral home on Wednesday, December 5, at 10:15AM followed by the funeral mass celebrated at St. Anthony's Church at 11AM. Burial is in Glenwood Cemetery.

Mr. Cavallario was born in Watertown on September 16, 1920, son of Carmello and Sadie Rizzo Cavallario, and he attended Watertown schools.

On December 9, 1942 he entered the US Army. He served in the 14th Armored Division, where he drove tanks. His duties included serving in Rhineland and Central Europe, and he was injured in the Battle of the Bulge on April 6, 1945. Sam received the Purple Heart, European African Middle Eastern Theater Campaign Ribbon with 2 service stars, and the Good Conduct Medal. He was honorably discharged as a Technician 5th Grade on August 21, 1945.

Before and after WWII, he had worked at NY Airbrake, Watertown, and then with his parents and brother, he worked for Cavallario Bros. Produce Farm at 1000 Coffeen St. In 1950 he moved to Alexandria Bay with his brother, Joe, to start Cavallario Brothers Meat Market & Grocery. In 1956 he then moved to Ogdensburg and purchased Oscar's Tavern, now Oscar's Restaurant, which he ran until his retirement in 1978. Sam helped his brother, Frank, at Cavallario's Steak House in Alexandria Bay for several years, and then retired to take care of his brother, Joe. Over the years, Sam was known for his pizza and his special spaghetti and meatballs. He enjoyed golf, gardening, watching sports, and going to all his families' restaurants. He will always be remembered for his gentle, kind, and quiet nature.

He was a communicant of St. Mary's Cathedral, Ogdensburg. He was a life member of Elks Lodge, 722, VFW Post 2936, and American Legion Post 69, all in Ogdensburg.

Condolences may be made to his family at www.cummingsfuneral.com.