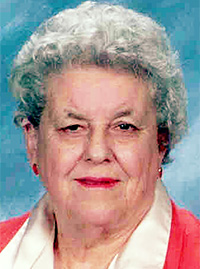 A calling hour will be held Friday, May 27, from 11AM - 12PM at Cummings Funeral Service, Inc., Watertown followed by the funeral service at 12:30PM with Rev. Dominic Kriegbaum presiding. Burial will be in Brookside Cemetery.

She worked for a short time at Faichney's Thermometer and as a cashier in the cafeteria of Case Junior High School for over ten years. She was a former member and board member of First United Methodist Church and she was very church and family orientated. Betty was a former member of the BeeGee's in Brownville and had volunteered and served as a board member of the Watertown Urban Mission.

She is survived by her four sons, Terry L. and Clara, Kevin P. and Cindy, and Chris S. and Marlene, all of Watertown and Fay M., Oswego; nine grandchildren and twelve great grandchildren; sister, Jean and Michael Bolognesi, Pittsford; a niece, a nephew and several cousins. Her son, David A., died October 30, 2014.

Donations in her name may be made to Watertown Urban Mission, 247 Factory St., Watertown, NY 13601. Online condolences to her family may be made at www.cummingsfuneral.com.