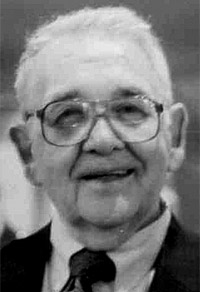 Deacon William G. Schmidt, 93, Watertown and formerly of Adams, passed away Sunday morning, May 15, 2016, at Samaritan Keep Home where he had resided since April.

His body will be received into St. Patrick's Church and lie in state Wednesday evening, May 18, with a vigil service held at 7:00 PM. There will be a calling hour on Thursday, May 19, from 8:30 - 9:30AM at the church followed by the funeral mass celebrated at the church at 10:00AM with Most Reverend Terry R. LaValley, Bishop of Ogdensburg, officiating. Msgr. Robert H. Aucoin, pastor of St. Patrick's Church, will concelebrate with priests of the diocese and fellow Deacons assisting and Rev. Arthur J. LaBaff will be the homilist. Burial will be in Glenwood Cemetery.

Mr. Schmidt was born in Utica on May 16, 1922, son of James H. and Eleanor Clark Schmidt. On October 9, 1942 he entered the US Army. He served in Ardennes, Central Europe, Normandy, Northern and Southern France, Rhineland and Rome-Arno. Bill received the European-African-Middle Eastern Service and the Good Conduct Medals. He was honorably discharged on September 29, 1945. After his service, he began college and received his B. S. in Physical Therapy from Ithaca College on June 4, 1949 and a Masters in Education from Syracuse University.

In 1949 he married Sara Vivian Phelps at Holy Family Church in Fulton.

In 1952 the couple moved to Watertown where Bill became the first licensed physical therapist in the city. He became Chief of Physical Therapy at Mercy Hospital and also maintained a private practice in physical therapy. He enjoyed gardening and caring for his land and camping.

In 1985 he was ordained a Deacon by the Diocese of Ogdensburg and had served as president of the St. Lawrence Society, the Ogdensburg Diocese's organization for Deacons. He was a communicant and Deacon at St. Patrick's Church. In his ministry Bill enjoyed serving his church and deaconate by visiting the sick and homebound and was very devoted to his ministry.

Donations in his name may be made to either St. Patrick's Church, 123 S. Massey St., Watertown, NY 13601 or to a charity of your choice. Online condolences may be made at www.cummingsfuneral.com.