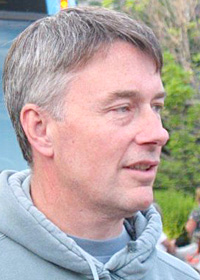 Joseph John Turcotte, 51, died Monday, May 2, surrounded by the love of his family following a long struggle with cancer.

The memorial service celebrating his life will be at 11AM on Saturday, May 7, at the Frink Park Pavilion, Riverside Dr., Clayton. In lieu of flowers contributions may be made in his name to The Cancer Resource Center of the Finger Lakes, 612 W. State St., Ithaca, NY 14850.

Joe was born in Watertown on September 30, 1964, the fourth of Joseph and Suzanne Turcotte's six children. He is preceded in death by both his parents and a sister, Jennifer, who died in infancy.

He graduated from Alexandria Bay High School in 1983. And went on to earn an Associates degree in Math and Science from Jefferson Community College and a Bachelors in Science degree from SUNY College of Environmental Science and Forestry in Syracuse.

Joe began his career in government in Orange County California. Eventually, working for transit systems in both Savannah, Georgia and Charlotte, NC. In 2005, he was named General Manager of Tompkins Consolidated Area Transit in Ithaca, NY. In 2011, under his leadership, TCAT was named the best transit system of its size by the Washington DC - based American Public Transportation Association. He was known by his colleagues for his steady guidance, sense of humor and fun and fairness.

Joe was a lifelong hockey fan, having started playing when he was 4. He never gave up on the Toronto Maple Leafs.

But his true love was his family. He married his high school best friend Lynda Natali and together they traveled and built a life. In 2004, his beloved son Joseph "Mac" Turcotte was born and he devoted himself to being a father. He also loved his hometown of Clayton. And needed nothing more then spending a day with them on the beautiful St. Lawrence River.

Online condolences to his family may be made at www.cummingsfuneral.com.