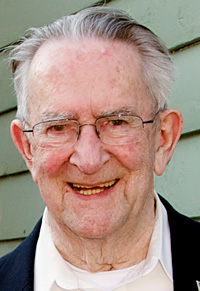 William E. Keegan, 87, lifetime resident of Watertown, N.Y., died early Tuesday morning, November 27th, while surrounded by his loving family. His final four weeks of life were spent under the care of the Hospice of Jefferson County.

Born December 3, 1924 to Isidor Edward and Anna Gilligan Keegan, his working career began early in life as a carrier for the Watertown Mirror, a weekly newspaper with a short lifespan back in the 1930s.  It was there that he received his Social Security card in March 1937.  He then was a Carrier for the Watertown Daily Times for a number of years.  He set pins in the bowling alleys at the Black River Valley Club and for a short period of time worked on maintenance (scrubbing floors) at the Agricultural Insurance Co.  After learning how to play the Bugle, he served as Bugler on the staff of the Jeff-Lewis Boy Scout Camp in 1940 when it was located at Lake Bonaparte.  The following year he was the Camp Bugler for the American Canoe Association for their annual meeting in the Thousand Islands.

He was a grandson of the late Police Chief John A. Gilligan, as well as the grandnephew and namesake of the late Fire Chief William E. Gaffney.

He graduated from Watertown High School in January 1942, and immediately went to work at Garland City Parts Corp.  After completing a student flying course and logging a small amount of solo hours, he enlisted in the Army Air Corps Cadet program in December 1943, and was called to active duty in March 1944.  He first went to Fort Dix, NJ and after testing was sent to Keesler Field in Biloxi Mississippi for further testing and Basic Military Training.  From there he was assigned to the College Training Program at the University of Alabama at Tuscaloosa.  After the College program was shut down in favor of “On the Line Training”  he was sent to Aloe Field in Victoria, Texas.  In 1945 overseas returnees were given preference in the Cadet program, so he was sent to Clerk-Typist school at Lowry Field, Denver, Colorado.  He was stationed there on V-J Day.  He, along with a large group of trainees, was sent to Shepherd Field in Wichita Falls to temporarily work in a separation center being opened there and had the assurance that they would be included in the next pre-flight class being formed at Randolph Field.  Later in 1945 they were called to a meeting at Shepherd Field and informed that because of the large number of pilots already trained they had the option of remaining in the Air Corps as enlisted men with the opportunity for rapid advancement, or they could accept an Honorable Discharge and take the chance of being drafted into the regular Army.  Since by then the war was over, he along with the vast majority present at the meeting elected to receive the Honorable Discharge, and he was separated from the service in November 1945.  He was awarded the American Theater Service Medal, Good Conduct Medal, and Victory Medal.

He was a member of Holy Family Church, served as an Usher for a number of years.  He was a 65 year member, life member and Past Commander of Army and Navy Post 61 American Legion.  He was a former 35 Year member of BPOE # 496.  He enjoyed golf and was a former member of the Watertown Golf Club.  He was a Life Member of the North Side Improvement League.  Long interested in Bowling, he served as President of the Fraternal Bowling League and also the Automotive Bowling League.  He also was instrumental in obtaining the NY State American Legion Bowling Tournament for Watertown in 1975.  For several years he was a coach or manager for the Baker Pharmacy Little League team in the Federal little league.  At one time he also enjoyed fishing in lake Ontario for Bass in the summertime and downhill skiing at the Dry Hill ski area in the winter.

Calling hours will be held at Cummings Funeral Service, Inc., Watertown on Thursday, November 29th, from 5 - 8PM. A prayer service will be at the funeral home on Friday, November 30th, at 9:45AM followed by the funeral mass celebrated at Holy Family Church at 10:30AM with Rev. Timothy Canaan officiating. Burial will be in Glenwood Cemetery.

Any memorial contributions may be made to Hospice of Jefferson County, 1398 Gotham Street, or Jefferson Rehabilitation Center, 420 Gaffney Drive, both in Watertown, N.Y. 13601.

Condolences may be made to his family at www.cummingsfuneral.com.