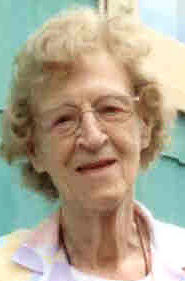 Calling hours will be held at Cummings Funeral Service, Inc., Watertown on Friday, April 29, from 5 - 8PM. A prayer service will be at the funeral home on Saturday, April 30, at 12:15PM followed by the funeral Mass celebrated at Holy Family Church at 1PM with Rev. Steven Murray, pastor, presiding. Burial will be in Glenwood Cemetery following the mass.

Jeri was born in Fine on July 14, 1926, daughter of William and Rena Compo Wells and she graduated from Harrisville High School. She married Joseph F. Jenack on December 30, 1944 in Harrisville and he passed on September 29, 1950. On January 19, 1957 she married Roy F. Remus at Holy Family Church.

For over 50 years she was a dance instructor at various dance studios in the area and to her students, she was fondly called "Miss Jeri". She later worked at the Flower Memorial Library. She was a Certified Dance Instructor of Dance Masters of America, a communicant of Holy Family Church and a member of American Legion Auxiliary Post 61.

Donations in her name may be made to a charity of your choice. Online condolences to Jeri's family may be made at www.cummingsfuneral.com.