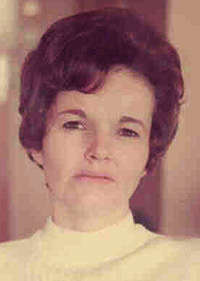 Beverley J. Sugrue, 80, formerly of Philadelphia, NY passed away Saturday, April 16, 2016, at Samaritan Medical Center. She had resided at Samaritan Summit Village for over two years.

Calling hours will be held at Cummings Funeral Service, Inc., Watertown on Wednesday, April 20, from 5 - 7PM. The funeral mass will be celebrated on Thursday, April 21, at 10AM at St. Patrick's Church with Rev. Joseph Christy presiding and burial will follow in Brookside Cemetery, Watertown.

Bev was born in Toronto, Canada on January 7, 1936, daughter of Albert and Elma Stevens Seymour and she attended local schools. After moving to the US she maintained dual citizenship. On October 31, 1953 she married Walton Sugrue and the couple divorced in 1976. She raised seven children, many times as a single parent due to deployments. She enjoyed Bingo, reading, camping, and her dogs.

In lieu of flowers the family wishes donations in Bev's name to be made to Jefferson County SPCA, 25056 Water St., Watertown, NY 13601. Online condolences to her family may be made at www.cummingsfuneral.com.

12
#11 Debbie McKenzie RMM 2016-04-20 19:17
Patti - so sorry to hear about your Mom.
Report to administrator
#10 Susan & Jim Ingram 2016-04-19 19:13
Judy we are very sorry for the loss of your Mom!! I know how hard it is to lose a Mom! I miss mine more and more each day!! Praying for you and your family for comfort! Feel God holding you tightly! Love you!!!!!
Report to administrator
#9 Linda Pastorius 2016-04-19 11:30
I am so sorry that I cannot be there at this time of your loss. Your mom was such a wonderful person and so fun to be around. I remember the card games on Thursdays at Joyce's house. She was full of love for her entire family. One of her greatest legacies is her children. Joyce you are an awesome person and your mom loved you and your siblings so much. Celebrate your mom's life and know that my thoughts and prayers are with you and your family. I love you lots!
Report to administrator
#8 Ellie Minnick 2016-04-19 09:06
Patti, Dave & the entire family,

We were so sorry to learn of this. Please know our thoughts are with all of you. If you need anything, please let us know.

Report to administrator
#7 Andrea Wenderski 2016-04-18 22:07
To the entire family- so sorry for your loss. Bev was such a wonderful, kind, fun and funny lady! I have a lot of wonderful memories sitting around the table listening to her stories, and LAUGHING! You are all in my thoughts and prayers, and I love you all! My thoughts and prayers are with you all. XOXO!
Report to administrator
#6 DEBRA WEAVER 2016-04-18 19:48
So very sorry to the entire family. Patti, your mom was a sweet person and she can now rest in peace and out of pain. Cherish her memories and all the good times. We are always here if you need anything. Love, Mike & Deb Weaver
Report to administrator
#5 Patti Farrell 2016-04-18 19:13
Judy, Patty, and family,
So sorry to hear of your Mom passing, there are no words that will ease your pain just know you and your family are in our thoughts and prayers.
Report to administrator
#4 karen Loftus 2016-04-18 19:10
So sorry for your loss. Your mom was a beautiful lady.
Len and I are in Myrtle Beach so can't attend. Thinking of you and your family.
Report to administrator
#3 Karen Keenan 2016-04-18 12:49
Joyce, I am so sorry to hear of your mom's passing. When I think of Bev, I think of her laughing with you. She seemed like she was always ready for fun. May the love you share with her bring you comfort, as that love never ends.
Report to administrator
#2 Robin Conners 2016-04-17 20:54
I was deeply saddened to hear about Aunt Bev. I have the fondest memories of her annual summer visits. She brought such fun, comfort and joy every year to my mom. They maintained a very special bond that saw them through a difficult childhood all the way up into their senior years. Aunt Bev was a blessing to my mom, and indeed, to us all. It's very difficult to lose a mother. She fills a special role in your life that is unlike any other relationship you may ever have. She sometimes knows you better than you know yourself. Even as an adult, I'm not sure that there's anything more comforting than a mom's hug. The amazing thing, though, is that Aunt Bev left a wonderful legacy...childr en, grandchildren, great-grandchil dren, extended family and friends.. She has touched all of those lives in her own special way and thus a part of her will always be with you. I have no doubt that my mom will welcome her with open arms as they meet again. Robin Conners-Kritzky
Report to administrator
12
Refresh comments list