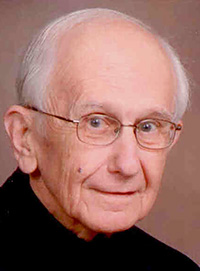 Calling hours will be held at Cummings Funeral Service, Inc., Watertown on Friday, April 15, from 4 - 7PM. The celebration of the funeral mass will be Saturday, April 16, at 10AM at Our Lady of the Sacred Heart Church, Watertown with Rev. Jonas Tandayu, pastor, presiding and burial will follow in Glenwood Cemetery.

Arch was born in Watertown on July 4, 1932, son of Archie and Ruth O'Reilly Laverty. Many people remember his father as one of the first pilots in the Watertown area. He graduated from Watertown High School in 1950, then attended the St. Lawrence College Center in Watertown and Cornell University. In later years he took several classes at Jefferson Community College.

On February 12, 1955 he married Roseanne Slack at St. Patrick's Church, Watertown with Rev. Frederick P. Diviney officiating. He was first hired to work in the Central Laboratory of the old St. Regis Paper Co. in October 1954 and continued with the succeeding companies. Archie retired from Champion International in 1990 as Technical Director.

Arch was proud to be an early and continuing participant in Credo, Watertown Urban Mission and the Celebration Singers with whom he played guitar. He also served on the Community Service Board, the Board of Directors of Jefferson County Public Health and was an active volunteer at Samaritan Medical Center.

After surviving his first cardiac arrest and heart by-pass surgery, his enthusiasm for the benefits he experienced at the Samaritan Medical Center Cardiac Rehab program inspired him to help create the Heart Reach Program. The Program visits recovered heart patients and encourages newly diagnosed cardiac sufferers.

A life-long ardent Brooklyn Dodgers fan, he never really accepted their transfer to Los Angeles. He grudgingly transferred his allegiance to the New York Mets. He was also a fan of the NFL's NY Giants and NHL's NY Rangers. Arch was an avid golfer but especially loved thoroughbred horse racing and delighted in an annual trip to the Saratoga Race Track with Rosie and dearest friends.

Anyone wishing to make a memorial donation in Arch's name might consider Credo, 595 W Main St., Watertown Urban Mission, 247 Factory St., or Northern NY Community Foundation, Inc., 120 Washington St., Suite 400, all in Watertown, NY 13601. Online condolences to his family may be made at www.cummingsfuneral.com.