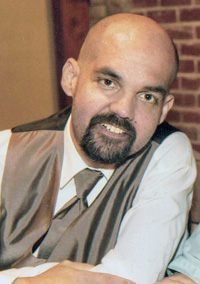 Kurt H. Thurheimer, 44, of Adams Center, NY, passed away peacefully on March 30, 2016. Born April 20, 1971, he was the son of Dean H. and Patricia J. Thurheimer. He was raised in Adams Center and attended South Jefferson Central Schools.

Kurt was active in Webelos, Cub Scouts and Boy Scouts growing up. He was an avid and proficient drummer, and was offered a scholarship to play his drums.

Kurt spent time living in Durham, NC, Boston, MA, and Sacramento, CA, before returning to Adams Center several years ago. He attended Sacramento City College, and earned an NCCER Core Level I and OSHA card from BOCES to become a certified electrician. His jobs have included working as a waiter, a construction crew foreman, a river rafting guide, and at Dry Hill Ski area.

Kurt loved the outdoors and spent much of his time camping, hunting, fishing, hiking, climbing, and skiing. His favorite activity of the last few years was kayaking. He loved professional and college sports, especially basketball and football, and was a dedicated Steelers fan his whole life.

Kurt had a wonderful sense of humor, and was best known for his entertainment skills and making people laugh. He will be extremely missed by his family and friends.

Calling hours will be held Monday, April 4, from 4 - 6PM at Cummings Funeral Service, Inc., Watertown. The funeral will follow at 6:30PM at the funeral home.