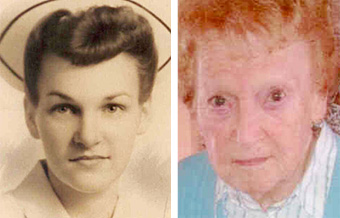 A calling hour will be held at Clayton United Methodist Church on Saturday, April 2, from 9:30 - 10:30AM followed by the funeral service at the church at 11AM. Burial in Depauville Cemetery will be at the convenience of the family. Arrangements are entrusted to Cummings Funeral Service, Inc., Clayton.

Jean was born in Watertown on July 18, 1927, daughter of Hiram and Frances Palmer Wiswell. She was a 1944 graduate of Clayton Central School. While in high school she was a cheerleader and was recognized for her unusual figure skating ability. In 1947 she graduated from Genesee Hospital School of Nursing, Rochester as a registered nurse. During World War II she was a member of the US Cadet Nurse Corp. After graduating Jean actively pursued her profession, working nearly 35 years as an RN, especially for the House of the Good Samaritan, now Samaritan Medical Center. She also worked as a private duty nurse.

On May 9, 1948 she married John N. "Jack" Schafer at the Clayton United Methodist Church with Rev. Henry Bridges officiating. Mr. Schafer, her loving husband of 54 years, passed on June 9, 2002.

Donations in her name may be made to either the Clayton United Methodist Church, 324 John St., Clayton, NY 13624 or American Cancer Society, PO Box 7, E. Syracuse, NY 13057. Online condolences to Jean's family may be made at www.cummingsfuneral.com.