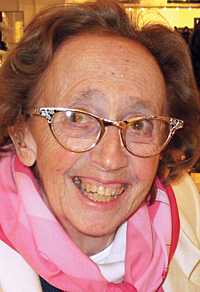 Bee Johnson passed away on March 17, 2016 with her family at her side. She was a devoted wife to Harold whom she lost in 1993, and mother to her son Robert and daughter Lynn Margaret whom she lost to lupus at the age of forty three. Her last smile was for her great granddaughter, Rhoda.

Mom was a woman of great strength, who raised her children alone much of the time in Toms River, NJ, when her husband was at sea in the Merchant Marine. She imbued within her children the love of learning. There were the hands on science projects to supervise. Yes, an X-ray machine and a one million volt Tesla coil built from scratch. She took us to concerts and Broadway shows and shared Harold's love of the opera. She loved jazz and Big Band music.

Bee was most proud of her own educational accomplishment earning a college degree from Georgian Court College in her sixties. After coming to Sackets Harbor, NY in 2007, she audited history classes at Jefferson Community College. She was a familiar figure coming and going to classes with her walker. She was honored to give a talk at the age of 88 to one of her classes about her life during the depression and WWII.

During WWII, Bee was a teletypist in the Times Building, and was entrusted to transmit an encrypted message directly between President Roosevelt and Winston Churchill. She was very proud of her very first vote at the age of 21 for FDR. She instilled in her children the importance of voting, admonishing us, "If you don't vote, you can't complain." She never failed to vote in an election.

Bee was a child of the Great Depression. She didn't trust banks and until coming to live in Sackets would store canned goods in the basement. She gave great perspective to what hardship really was and an appreciation to her children of how good we really have it. She never liked her given name, Blossom. Upon returning to New York City as a teenager, after her father's dry goods store failed during the Depression in Georgia, she was teased over her name, but mostly about her acquired Southern accent. She always then went by "Bee."

And a bee she was. She was an advocate for women's rights, being president of the local League of Women Voters in Toms River. She was a charter and founding member of the Ocean County, NJ, formerly Murray Grove, Unitarian Church. She especially valued her friends at All Souls Unitarian Universalist Church who welcomed her soon after her arrival in Sackets. She was active in the PTA during her children's schooling. She cared about the environment and wildlife. She was a devoted wife, ferrying Hal to various ports to meet ships going to and coming from sea.

You always knew where Mom stood. Mom was very political. She always believed that there should be a social safety net and loved FDR for what he did during the Depression. One could say she was a "yellow dog democrat." She so much wanted to vote for Bernie Sanders.

Bee didn't particularly like the winters up here Sackets, but loved sitting on the porch during the summers. She will be sorely missed by her son, Robert. Her daughter-in-law, Mary, was her major care giver during her waning years, and every now and then realized the enormity of Mary's gift and would thank her. She didn't like getting old, but did it with courage and tenacity. At the end, she experienced the compassionate care of her hospice nurses which made it possible to stay at home.

A short memorial service will be held Sunday, April 10, 2016 at All Souls Unitarian Church, Watertown at 12 noon after the morning service. She will be interred next to her husband at the Doyle Veterans Cemetery in New Jersey later this spring.

In lieu of flowers, donations can be made to the Lupus Foundation of America, 2000 L St. NW, Ste. 410, Washington DC 20036 or at www.lupus.org or the National Wildlife Federation, PO Box 1583, Merrifield, VA 22116 or at www.nwf.org. Arrangements are entrusted to Cummings Funeral Service, Inc., Watertown, NY and online condolences may be made at www.cummingsfuneral.com.