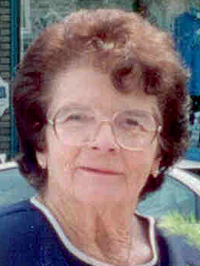 A funeral mass will be celebrated on Monday, March 7, at 11AM at St. Mary's Church with Rev. Arthur LaBaff, pastor, presiding. Burial will take place in the spring in St. Mary's Cemetery. Arrangements are entrusted to Cummings Funeral Service, Inc., Clayton. The family will receive friends from 1 - 5PM at the Knights of Columbus Hall, James St., Clayton after the funeral.

Libby was born in Clayton on November 18, 1921, daughter of Ernest P. and Bertha A. Sullivan Loveland. She graduated from St. Mary's High School, Clayton.

She had worked in the cafeteria at St. Mary's School and as a caregiver. She then met her future husband when she waitressed at the C-Way Tourinn, which he and his brother started in 1946. Libby also had operated the El Rancho Motel on East Line Rd., Clayton. She retired as Vice President of the C-Way Resort, which included a new restaurant that was built in 1954, and later expanded with a motel and golf course.

She was a communicant of St. Mary's Church and a member of its Altar & Rosary Society. She was a member of the auxiliaries of both the Colon-Couch American Legion Post 821 and Knights of Columbus Council 350. She enjoyed golfing and bowling and participated in several leagues.

Libby is survived by her five children, Patricia E. Natali and husband, Ken Kinnard, San Francisco, CA, Anne M. and John Lefevere, VA, John E. Natali, Joseph P. and Constance J. Natali and Mary C. and Gary L. Denesha, all of Clayton; eleven grandchildren; two sisters-in-law, Kathy Loveland, FL and Marilyn Natali, Clayton; and several nieces, nephews and cousins. Besides her husband, Don, she was predeceased by her brother, Ernest P. Loveland, Jr. and five sisters, Rita Good, Lucy Swart, Katherine Cupernall, Margaret Moore and Betty Loveland, in infancy. The family would like to send a special thank you to her caregivers over the past few years.

Donations in her name may be made to St. Mary's Church, 521 James St., Clayton, NY 13624. Online condolences to Libby's family may be made at www.cummingsfuneral.com.