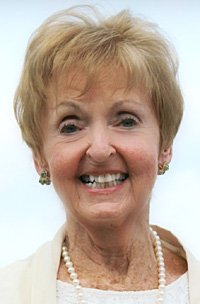 Mary Dacey Malara, 79, Siesta Key, FL and summer resident of Tennis Island, passed away Tuesday, March 1, 2016, at Sarasota Memorial Hospital with her family at her side.

Calling hours will be held at Cummings Funeral Service, Inc., 214 Sterling St., Watertown on Wednesday, March 9, from 2 - 4PM and 7 - 9PM. The funeral mass will be celebrated at St. Anthony's Church on Thursday, March 10, at 11AM with Rev. Donald Robinson presiding. Entombment will follow in the family mausoleum in Glenwood Cemetery.

Mary was born in Watertown on September 20, 1936, daughter of Robert F. and Frances Roxe Dacey. She graduated from Immaculate Heart Academy and received her Bachelor's degree in Education from Potsdam State.

She taught at schools in Rochester, Watertown and the Bronx. She was a communicant of St. Anthony's Church, Watertown and St. Michael's the Archangel Church, Siesta Key, where she was also a Eucharistic Minister. Mary enjoyed reading and walking. With her husband, Tony, she enjoyed traveling and the St. Lawrence River from their Tennis Island summer home.

Donations in her name may be made to St. Anthony's Church, 850 Arsenal St., Watertown, NY 13601. Online condolences to Mary's family may be made at www.cummingsfuneral.com.