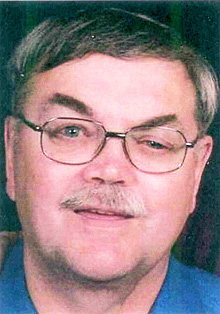 Peter E. Hare, 66, Richards Dr., Watertown passed away Friday evening, February 12, 2016, at Hospice of Jefferson County at the Ellis Farm. The family would like to thank the nurses and staff for their comfort and care during Peter's stay.

Calling hours will be held at Cummings Funeral Service, Inc., Watertown on Thursday, February 18, from 4 - 6PM. The funeral mass will be celebrated at St. Anthony's Church on Friday, February 19, at 10AM with Rev. Donald Robinson presiding and burial will be at the convenience of the family in Glenwood Cemetery.

Peter was born in Watertown on May 4, 1949, son of Richard O. and Mary Fields Hare. He was a 1967 graduate of Watertown High School, 1970 from Jefferson Community College and 1972 from SUNY Oswego. He received his Masters in Education in 1980 from SUNY Oswego and had numerous insurance designations including a CLU.

A marriage to Karen Hutzler ended in divorce. On August 7, 1999 he married Rosemarie Symonds Osborne at St. Patrick's Church. He taught briefly at Sackets Harbor Central School from 1977 - 1979. He then became involved in the insurance industry, working over 20 years with various brokerages, including Prudential Insurance. Peter was a communicant of St. Anthony's Church and a member of its Men's Mount Carmel Society. He was also a member of Elks Lodge 496. He enjoyed hunting, gardening, golf and watching sports, especially baseball and football.

I was so sorry to learn of this. Please let me know if there is anything I can do for you.