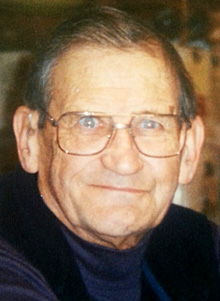 Anthony "Andy" Zach, 89, of Clayton passed away peacefully with his family at his side on Saturday morning, January 23, 2016.

Calling hours will be held at Cummings Funeral Service, Inc., Clayton on Tuesday, January 26, from 4 - 7PM. A prayer service will be at the funeral home on Wednesday, January 27, at 10:15AM followed by the funeral mass celebrated at St. Mary's Church at 11AM with Rev. Vincent T. Freeh, MSC officiating. The burial will be in the spring in Clayton Cemetery.

Andy was born in Theresa on December 21, 1926, son of Henry and Johanna Ritter Zach and he graduated from LaFargeville High School in 1944. He worked on the family farm in LaFargeville and then as a truck driver for Smith Transport until 1951. He then entered the US Army, serving with the 59th Engineering Construction Co. He was honorably discharged, in Alaska, as a Staff Sergeant in 1953. After his discharge he worked for a construction company in Alaska.

In 1954 he moved to Clayton where he operated a service station, which sold and serviced small engines and sold foreign sport cars. From 1965 until his retirement in 1991 he was a mobile tool distributor, first for MAC Tools and later for MATCO Tools. After his retirement he was a real estate salesman.

For all of his life, Andy had a love of family and community. He was a charter member of the Clayton Lions Club where he served as president from 1961 - 1962 and as secretary from 1992 - 2007. He also served as cabinet secretary-treasurer for district 20W for the 1996 - 1997 year. In 1996 he was awarded the Melvin Jones Fellowship by the Club and in 1998 he received an award from the Lions 20W district. He served as president of the Clayton Chamber of Commerce from 1957 - 1958 and was a member of both the Clayton Hockey Hall of Fame and American Legion Colon-Couch Post 821. Andy was one of the founders of Thousand Island Go-Kart Club in Clayton, had served as its president, and was a New York State karting champion in his class.

Andy enjoyed reading, history, working on small engines and after his retirement, golf. He also enjoyed volunteering at the Antique Boat Museum and for the Village of Clayton with their walking tours. He was a driver for Jefferson County Volunteer Transport and was a communicant of St. Mary's Church.

He is survived by his four children and their spouses, his twin daughters Tonia Z. and James H. Thirtle and Marcia J. Zach and husband, Michael E. Tomb, all of Rochester, Amy Z. and Stephen J. Turcotte, Clayton and Kyle A. and Vicki M. Zach, Rochester; three grandchildren, Matthew S. Turcotte, Nolan A. Zach, and Nadia M. Zach; his brother and his wife, Frederick W. and Jean Zach, Kenniwich, WA; one niece, two nephews, and cousins. Along with his wife, Pauline, he was predeceased by his two brothers, Eric and Henry.

Donations in his name may be made to the Clayton Lions Club, c/o Mr. George Forbes, 15466 Lyellton Dr., Clayton, NY 13624. Online condolences to his family may be made at www.cummingsfuneral.com