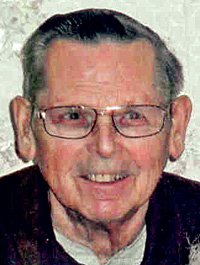 Richard F. "Dick" Morris Sr., 84, Dorsey St., Watertown passed away at his home, in the care of his family and Hospice of Jefferson County, on Monday morning, January 18, 2016.

Calling hours will be held at Cummings Funeral Service, Inc., Watertown on Thursday, January 21, from 5 - 8PM and on Friday, January 22, from 10 - 11AM. The funeral service will follow on Friday at 11AM with Rev. Leon VanWie, pastor of Asbury United Methodist Church, presiding. Burial will take place in the spring in Sanford Corners Cemetery, Calcium.

Dick was born in Watertown on April 30, 1931, son of Floyd C. and Hazel Tripp Morris and he attended schools in Watertown. On June 4, 1955 he married Rosemary F. LaGrow at St. Patrick's Church.

He began working at Hardiman-Woolworth Furniture Store, Watertown. On October 27, 1950 he enlisted with the US Army Reserves and was later activated, serving with the Military Police at Ft. Hamilton in Brooklyn. He was honorably discharged on May 30, 1952.

After his discharge Dick worked for Carrier Corp, Syracuse for 3 years, then Knowlton Bros., Watertown for 17 years. After 20 years of service he retired as security guard at the Jefferson County Office Building. He was a member of American Legion Post 61. Dick enjoyed camping, gardening, feeding the birds, and especially gathering with his family.

Besides his wife, Rosemary, he is survived by his 3 sons and their wives, Richard F. Jr. and Linda M., Ralph F. and Brenda, and Wayne C. and Keri, all of Watertown; 3 daughters and their husbands, Karen L. Smith and Dennis, Calcium, Cynthia R. Dummitt and Marty, Liverpool, and Cassandra D. Vallance and Mark, Watertown; 14 grandchildren and 2 great grandchildren, with a set of twins on the way; sister-in-law, Harriet Morris; and numerous nieces, nephews, and cousins. He was predeceased by 4 siblings and their spouses, Robert V. and Irene Morris, Genevieve and Thomas Adderly, Lucille and Larry Kingsbury, and Geraldine and Vaughn Moore.

Donations in his name may be made to either Epilepsy Foundation, 8301 Professional Place, Suite 200, Landover, MD 20785 or Hospice of Jefferson County, 1398 Gotham St., Watertown, NY 13601. Online condolences to Dick's family may be made at www.cummingsfuneral.com