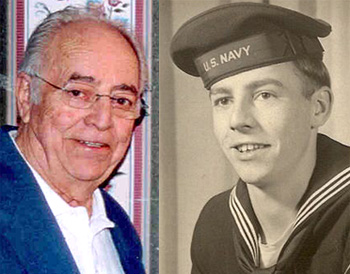 The funeral mass will be celebrated on Friday, January 15, at 1PM at Holy Family Church with Rev. Steven Murray, pastor, presiding. Burial will be at the convenience of the family in St. Mary's Cemetery, Evans Mills. At his request there will be no calling hours and arrangements are entrusted with Cummings Funeral Service, Inc., Watertown.

Bob was born in Evans Mills on February 28, 1932, son of the late Harry and Dorothy Chisholm McIlroy. He was a 1949 graduate of Watertown High School and received his associates degree from Canton ATC. He served in both the US Marine Corps and Navy and was honorably discharged as a Hospitalman 3rd Class from the Navy on January 28, 1955.

On October 24, 1959 he married Patricia Wilson, of Massena, a music teacher at Indian River Elementary School. She passed in 1991. He then married Patricia Benton Ellingsworth, a former classmate, at St. Mary's Church, Evans Mills on October 5, 1993.

He retired from NY Airbrake as a contract manager in August 1992 after 32 years of service to the company. Bob was a communicant of Holy Family Church. He was a member of both the American Legion Post 673, Black River and Ten Point Hunting Club, Harrisville and was a life member of the VFW Post 1400, Watertown. He was a past member of the Evans Mills Fire Dept. and the Evans Mills Lions Club.

Donations in his name may be made to either Holy Family Church, 129 Winthrop St. or SPCA of Jefferson County, 25056 Water St., both in Watertown, NY 13601. Online condolences to Bob's family may be made at www.cummingsfuneral.com