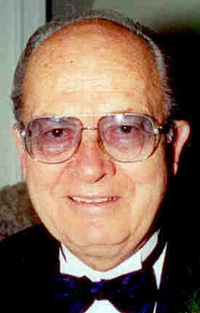 On Wednesday, November 18th, Dr. Harrington passed away peacefully at his Bartlett Point home under the care of hospice and his devoted caregivers. He is survived by his wife of 49 years, Beverly Allen Harrington, and four children: James L. Harrington, Jr. (Christie), of So. Orange, NJ; Diane A. Peterson (Chris), of Clayton, NY; David B. Harrington (Marcia), of Watertown, NY; Kathy A. Michael (John), of Watertown, NY; 12 grandchildren and 18 great-grandchildren.

Dr. Harrington was born on October 11th, 1925, in Watertown , the son of Lyle G. Harrington and Evelyn Bigwood Harrington. He attended and graduated from Watertown Public Schools in January 1943 and was recipient of the Hi-Y Cup. His premedical education was at St. Lawrence University and graduated with a B.S. degree. Subsequently he graduated from the University of Rochester School of Medicine and Dentistry with an M.D. degree in June 1949. His internship was at the Syracuse University Medical Center Hospitals followed by specialization in Ophthalmology at both the Harvard Medical School and Strong Memorial Hospital . He was a Fellow of the American Academy of Ophthalmology.

Dr. Harrington was a veteran of two branches of the military. During World War II he served in the Navy and during the Korean War, the U.S. Air Force, retiring as at the rank of captain.

Dr. Harrington practiced Ophthalmology in Watertown for 34 years and was associated with M.B. Kayani, MD during the last ten years. He was Secretary-Treasurer of the Jefferson Co. Medical Society for several years as well as serving as Delegate to the Medical Society of the State of New York . At the Good Samaritan Hospital he was Chief of the Ophthalmology Service as well as the President of the Medical Staff in 1973. He was active in the Watertown Chamber of Commerce and various other civic organizations, including the Board of Hospice of Jefferson County and the Jefferson County Association for the Blind. He also served on the Board of Education for the Watertown City School District for 10 years and was president in 1963.

Dr. Harrington married Ann Marie Brower on February 9, 1952 in Rochester , NY . They were divorced in 1963. He and Beverly Allen Arnoldy were married on July 16, 1966 at the Asbury United Methodist Church in Watertown by Rev. Russell Clark. Dr. Harrington loved spending time with his family, the mighty St. Lawrence River, sailing, boating, fishing and reading.

At his request, there will be no calling hours or funeral and burial is at the convenience of his family. Arrangements are entrusted to Cummings Funeral Service, Inc., Clayton and online condolences to Dr. Harrington's family may be made at www.cummingsfuneral.com