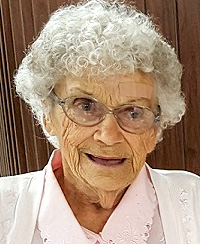 Marion R. Colin, 90, Sackets Harbor passed away Thursday, October 8, 2015 at Samaritan Medical Center, Watertown where she had been a patient for five days.

A funeral mass will be held on October 13 at 11AM at St. Andrew's Church, Sackets Harbor with Rev. H. Michael Gaffney, pastor, presiding and burial will follow in Lakeside Cemetery, Sackets Harbor. There will be no calling hours and arrangements are entrusted with Cummings Funeral Service, Inc., Clayton.

She worked as an inventory controller for Jamesway in Watertown, was a homemaker and worked for Green Thumb at the municipal building in Sackets Harbor. She was a communicant of St. Andrew's Church. Marion volunteered at the Pickering Museum, Sackets Harbor and at Samaritan Medical Center, Watertown, where she knitted over 1500 hats for newborns at the hospital. Marion was also a life member of the Sackets Harbor Post 1757 American Legion Auxiliary.

Donations in her name may be made to the St. Andrew's Church Food Pantry 110 E. Main St., Sackets Harbor, NY 13685. Online condolences to Marion's family may be made at www.cummingsfuneral.com