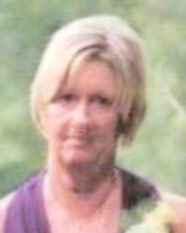 Calling hours will be held at Cummings Funeral Service, Inc., Watertown on Sunday, September 27, from 2 - 5PM. The funeral service will be at the funeral home on Monday, September 28, at 10AM with Pastor James Hayes, Christian Life Center, Chaumont, presiding and burial in St. Michael's Cemetery, Antwerp will follow.

Jody was born in Gouverneur on January 31, 1958, daughter of Zimri and Diane Overacker Bush. She graduated from Indian River High School in 1977 and from BOCES School of Cosmetology.

She worked at several jobs including Pizza Hut for 18 years. Jody was Methodist and a member of the Town of Watertown Volunteer Fire Department. She was very active with the Original Yanks Drum & Bugle Corp. She was an avid Yankees fan, enjoyed golf, and especially her grandchildren.

Donations in her name may be made to Original Yanks, PO Box 44, Watertown, NY 13601. Online condolences to Jody's family may be made at www.cummingsfuneral.com