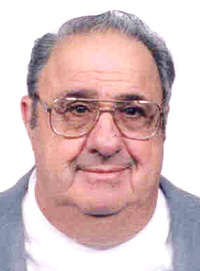 A funeral service will be held at Cummings Funeral Service, Inc., Watertown on Friday, November 16, at noon. The burial in St. Stephen's Cemetery, Croghan will be at the convenience of the family.
Mr. Geno was born in Watertown on July 29, 1927, son of Leo and Jennie Fardella Geno. He graduated from Watertown High School.

On June 19, 1945 he entered the US Navy. He received the Victory, American Theater and Asiatic Pacific Medals and was honorably discharged as a Seaman First Class on June 27, 1946.

Frank had worked for his brother, Pat, at Geno's Produce in Watertown. He then began his career with NYS Dept. of Transportation. After 35 years of service, he retired as a mechanic.

He was a communicant of St. Anthony's Church. He was a member of the Italian American Club, VFW Post 1400, American Legion Post 61, and the Civil Service Employees Union. At one time he had worked for Sammy's Florist where his specialty was shrubbery and he especially enjoyed coffee with his buddies in different diners and restaurants around Watertown.

Donations in his name may be made to St. Jude Children's Research Hospital, 501 St. Jude Place, Memphis, TN 38105-1942. Condolences to the family may be made at http://www.cummingsfuneral.com/.