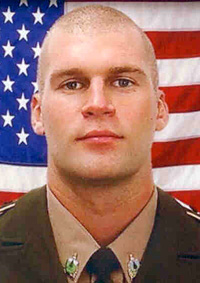 Kyle was born on August 21, 1987 to Virginia Bauter Woolf and Carlton Young in Watertown, NY. He graduated from General Brown High School in 2005 where he was an outstanding athlete in both Football and Lacrosse. He proudly served in the United States Air Force from 2007 - 2011, including tours in Iraq and Afghanistan. After his honorable discharge, he returned to the middle east where he worked for PSS/SGS, doing global integrated security. Kyle joined the Vermont State Police in January 2014 where he was an honored Trooper at the time of his death.

Kyle was a very hands-on proud Daddy to his 2 beautiful daughters, Kaydence Young (6 years) and Kinley Young (11 months) who were the light of his life.

In lieu of flowers, donations can be sent to Amanda Wilson, P. O. Box 130, Brownville, NY 13615 to be used for an athletic scholarship at General Brown High School. Online condolences to Trooper Kyle's family may be made at www.cummingsfuneral.com