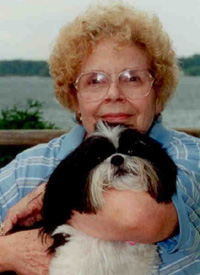 Bernice E. Nutting, 88, of Arlington Street died Saturday evening at her home under the care of her family and Hospice. Calling hours will be held on Tuesday September 8, 2015 at the Cummings Funeral Service, Inc. from 4:00 to 7:00 pm. The funeral service will be on Wednesday September 9, 2015 at 11:00 am with Rev. Leon Van Wie pastor of Asbury United Methodist Church officiating. Burial will be in Brookside Cemetery, Town of Watertown. In lieu of flowers contributions may be made in her name to Hospice of Jefferson County, 1398 Gotham Street, Watertown, N.Y. 13601

She was born on June 4, 1927 in Ogdensburg, N.Y., the daughter of Joseph and Hazel Burnette Sophy. She graduated from Ogdensburg Free Academy in 1944 and the State University of New York Plattsburg School of Nursing in 1947. Bernice married Paul J. Nutting on December 17, 1949 at the Ogdensburg Methodist Church with Rev Sparling officiating. Mr. Nutting, a tool designer for the N.Y. Airbrake Co. died on January 17, 1965. The couple had moved to Watertown in 1952.

Bernice was a registered nurse at the Samaritan Medical Center and after her retirement as head nurse of the fourth floor, she was a night supervisor at the Samaritan Keep Home. She was a member of Asbury United Methodist Church, the Samaritan Loyals, and The Red Hat Society.

She is survived by her two children, her son Paul J, Nutting and his wife Ilene, and her daughter, Kathleen A, Seery and her husband Gary, all of Watertown; her four grandchildren, Gary Seery Jr. and his wife Julie, Kimberly Allen, Joseph Nutting, all of Watertown and Christopher Nutting and his wife Sue of Victor; and her five great grandchildren ; her brother in law Ken Rogers, Watertown and several nieces, nephews and cousins. She is predeceased by her parents and her step father Jay Noble; her two brothers George and Joseph Sophy and her three sisters Lillis Rogers, Carole Brassard, and Joan Rogers.