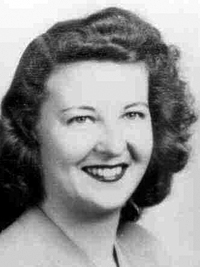 Eva S. Margrey, 96, formerly of Clayton passed away Thursday morning, August 20, 2015, at Country Manor Nursing and Rehabilitation Centre, Carthage where she has resided since April 6, 2011.

Calling hours will be held at Cummings Funeral Service, Inc., Clayton on Monday, August 24, from 4 - 7PM. A prayer service will be at the funeral home on Tuesday, August 25, at 10:15AM followed by the funeral mass celebrated at St. Mary's Church at 11AM with Rev. Arthur J. LaBaff, pastor, presiding. Burial will be in St. Mary's Cemetery.

Eva was born in the town of Alexandria on March 31, 1919, daughter of Harry E. and Mabel Sprague Caswell. She attended Plessis, Alexandria Bay and Clayton schools. On June 19, 1947 she married Louis F. "Buster" Margrey in the rectory of St. Mary's Church with Fr. George E. Racette officiating. Buster, an equipment operator for NYS DOT, died April 19, 2004.

Mrs. Margrey was a housewife, first and foremost. She also held several jobs through the years, including welder at Frinks SnoPlow, cafeteria worker at St. Mary's School, machine operator at the wax paper factory, and inspector and machine operator at Hawn's Knitting Mill, all in Clayton. She had been a communicant of St. Mary's Church, and a member of both St. Anne's Altar & Rosary Society and the Knights of Columbus Auxiliary Council 350. Eva was also a member of the Colon-Couch American Legion Post 821 Auxiliary. She was an avid bingo player and bowler, where she was a member of the Clayton Women's Bowling Hall of Fame.

Donations in her name may be made to either St. Mary's Church, 521 James St., Clayton, NY 13624 or Augustinian Academy, 117 West St., Carthage, NY 13619. Online condolences may be made at www.cummingsfuneral.com.