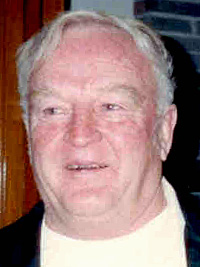 A Funeral Mass will be celebrated on Monday, August 24, at Holy Family Church at 11AM with Rev. Steven Murray, pastor, presiding. There will be no calling hours and arrangements are entrusted to Cummings Funeral Service, Inc., Watertown.

Mike was born in Watertown on February 16, 1928, the son of Gladys Forester Bresnahan Rosenblatt and he graduated from Watertown High School. He enlisted in the US Navy on May 24, 1945. He received the WWII Victory Ribbon and was honorably discharged as a Coxswain on August 7, 1946.

On September 9, 1950 he married Teresa "Terry" Burtch at St. Cyril's Church, Alexandria Bay. The couple would have celebrated their 65th anniversary this year. He served NY Telephone Co. for 49 years as a lineman and switchboard operator. Mike was a communicant of Holy Family Church, a life member of Elks Lodge 496, of which he was a member for over 70 years, and was a 70 year member of American Legion Post 61.

He enjoyed skiing, was a member of the Snow Ridge Ski Patrol for 30 years, and as a young man ski jumped at Lake Placid. He enjoyed boating and The St. Lawrence River, buying Island 92 in 1957. He was an avid duck hunter and was a 30 year member of the Jimmy Creek Inn Club, AKA the Shack Club, which was founded in 1906 and is the oldest continuously run club in the US. He was also a member of the Admiralty of the Thousand Islands.

Donations in Michael's name may be made to Holy Family Church, 129 Winthrop St., or Hospice of Jefferson County, 1398 Gotham St., both in Watertown, NY 13601 or St. Cyril's Church, 17 Rock St., Alexandria Bay, NY 13607. Online condolences may be made at www.cummingsfuneral.com