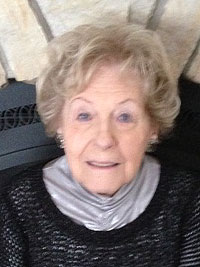 Gertrude Ingerson, 90, died peacefully at the home of her daughter and caregiver, Terry Ierlan in Clayton on Friday, July 17 2015.

A celebration mass will be held at St. Mary’s Church in Clayton on Thursday, July 23 at 11am with Rev. Arthur LaBaff, pastor of St. Mary’s. There will be no calling hours and the burial will be at the convenience of the family at St. Lawrence Cemetery. Arrangements are with Cummings Funeral Service, Inc., Clayton.

Mrs. Ingerson was born in Clayton on August 7, 1924, daughter of Frank and Gertrude (Garnsey) Bogenschutz where she attended St. Mary’s School. At the age of 16, she was asked by S. Gerald Ingerson to go to a movie. (We are all so grateful she said, “Yes”!) Three years later they were married, on Thanksgiving Day, November 26, 1942. Gerald was drafted and entered the army six weeks later. During his service, Gertrude lived with her parents at the farm at St. Lawrence. Gertrude was a stately matriarch who devoted her time to raising six children. She was the strong woman behind the man. S.Gerald Ingerson, Inc, would not have been such a success without her support and assistance.

She was a member of St. Mary’s Church, St. Anne’s Society, garden clubs in Vero Beach, Florida, Watertown and Clayton, New York and a Cub Scout leader. Her passions were her grandchildren, gardening and antiques. She will always be remembered for her beautiful flower gardens surrounding her home. Gertrude was determined that the antique oak woodwork be preserved when the IHA and Sisters of St. Joseph Mother House were being torn down. She spent days removing the wainscoting and archways. She refinished all of the oak, which still adorns the walls of her home to this day.

The family would like to thank Dr. Jack Rush and staff at Clayton Area Health Center, and the amazing nurses at Hospice of Jefferson County for providing excellent, compassionate care to the end!

In lieu of flowers, donations in her name may be made to Hospice of Jefferson County, 1398 Gotham St, Watertown, NY 13601.