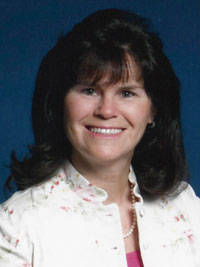 Roberta (Bobbi) Lynn Brabant 61 of Roanoke, formerly of Potsdam and Watertown, NY passed away on July 9, 2015 after fighting a courageous battle with Cancer. She died peacefully at her home in the loving arms of family surrounded with prayers of countless friends. Visitation will be held at the Oakey’s South Funeral Home in Roanoke on Sunday, July 12, from 2-4pm and 6-9 pm.

Bobbi was born November 24, 1953 to Lawrence J. McKenna and Helen Coolidge McKenna. She attended high school in Ogdensburg, NY and Watertown, NY. She received an undergraduate degree from Oswego State college in Oswego, NY, 1975 and her Masters and certification in Social work from Syracuse University, Syracuse, NY in 1978.

Bobbi is survived by her husband of 39 years, Joseph Brabant, Roanoke and a son Jeffrey of Austin, Tx. She is also survived by her mother, Helen Clifford of Siesta Key, Fl; her Step mother Cheryl McKenna, Potsdam, NY; a sister Deborah (Leo) Grant, Potsdam, NY and brother Charles McKenna of Boston, Ma. Her half sister, Bonnie Sharrit of Florida and Karen McKenna of Boston, Ma. Her mother in Law, Patricia Brabant of Watertown; her Sisters in Law, Charlene (Steve) Harrington of Warrensburg, Mo. and Michelle ( Tom) Joles of Watertown. Several nieces and nephews with whom she had a very special bond.

Bobbi worked as a Social worker for New York State Mental Health Department and proudly served as the co-director of the Outward Bound program as well as having a Private Practice in Watertown, NY, working with children, families and geriatrics for 12 years. Bobbi briefly held a private practice in Jonesboro Arkansas before moving to Virginia in 1994, she worked for Fresenius Dialysis center in Roanoke for 20 years. Bobbi was highly regarded as a Social Worker, she created a special bond with every patient that she dealt with and made a lasting impact on their lives. Bobbi especially loved every holiday and when you visited her home it was decorated appropriately for the season. She was so fun loving, one of her favorite holidays was Halloween, and she inspired the folks she worked with to dress up to cheer up the patients, she transformed herself into Snow White, Dorothy from the Wizard of Oz (red shoes and all), clowns, you name it.

Bobbi served on the Board of Directors of Credo Foundation and Transitional living in Watertown, NY. Bobbi served on the Board of Directors and was actively involved in the St. Francis of Assisi service dog association and loved her own service dog Scout. Bobbi developed life long friendships with many people. She was known to be kind, compassionate and extremely faith filled. Her death is a huge loss for not only her family but many friends.

The family would like to recognize Lewis Gale Hospital physicians and staff for the kind and compassionate care they provided Bobbi. Memorial contributions can be made to St. Francis of Assisi Service Dog Association or a charity of one’s choice.