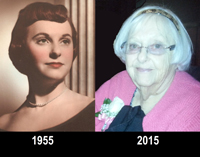 Daughter of Evelyn (Keeler) Furst and Grafton C. Furst, she was born on March 14th 1930 along with her lifelong and beloved twin brother Donald. Doreen enjoyed singing in the Methodist choir and her favorite hymn was “I would be true”. Music and dancing was always in her life. She began to play the clarinet from the tender age of 7 and then later in life she played in the Rochester Business School band.

In High School Doreen was involved in many pursuits such as cheerleading, Band, Grange 4H, and she belonged to FHA (Future Homemaker’s of America).She was an avid thespian and would be found often on the stage in the school auditorium. Writing poems was another favorite pastime of hers and some were accredited. By 16, her after school activities branched out to owning her own business “Dot’s Ice Cream Bar” located on Main Street in the village of LaFargeville. Though not a money maker it offered many a free refreshing treat for the friends who stopped in. In 1947 she graduated from LaFargeville Central School at the young age of 17. Moving on, she took advanced classes at RBI in Rochester, NY and enrolled in the medical secretary field. Her studies earned her a graduate typing certificate within early months of the program. After class activities included being a member of the Beta Sigma Phi Sorority.

After graduation, Doreen was first employed in the records department at the “House of the good Samaritan Hospital”, Watertown, NY. Later she advanced to a secretary’s position working for a three Lawyer firm including the Mayor of the city. Later on she was offered a position in Detroit Michigan with the General Motors Corporation. There she joined the Cadillac division as the private stenographer for the Chief metallurgist of the plant. Marriage plans required a move to Rochester, NY so she transferred to the GM division, Rochester Products, in Rochester. Doreen was married on August 6, 1955 in Rochester NY to Richard H. Heath at the Sacred Heart Catholic Church. After raising three children she reentered the work force and held a membership card for the Substitute Office Pool of Trained Personnel & was employed for a time at the Xerox Corporation.

Doreen enjoyed baking, traveling, poetry, and dance. She is survived by her twin brother Donald Furst (Joyce) of Watertown; Doreen’s three children: Deborahlyn M. Wansha (John) of Lafargeville, Jeffery R. Heath (Kathy) of Rochester, Lesley C. McBride (Rick) of California, 10 grandchildren and 11 great grandchildren with 1 on the way. Doreen will be greatly missed by her loving family, dear friends, and all those who found it a pleasure to know her. Online condolences to Doreen's family may be made at www.cummingsfuneral.com