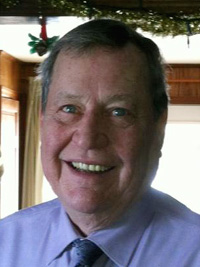 Patrick E. Moore, 71, Riverview Lane, Cape Vincent passed away at his home on Wednesday, May 13, 2015 under the care of his family and Hospice of Jefferson County.

Calling Hours will be held at Cummings Funeral Service, Inc., Clayton on Sunday, May 17, from 2 - 5PM. A Prayer Service will be at the funeral home on Monday, May 18, at 9:15AM followed by a funeral mass celebrated at St. Mary's Church, Clayton at 10AM with Rev. Arthur J. LaBaff, pastor, presiding. Burial with Navy and American Legion honors will be in St. John's Cemetery, LaFargeville.

Pat was born in Mineral Wells, TX on March 17, 1944, the son of Thomas and Jeanne Marie Bailey Moore. During his childhood his family traveled the world with his father and the US Army, expierencing many different cultures, until settling in California ,where he graduated in 1962 from Excelsior High School. In 1963 he entered the US Navy, and served aboard the USS Independence. He was awarded The National Defense Service Medal. In 1967 he was honorably discharged from active duty and remained in the Reserves until 1969.

Upon his discharge, he settled in Clayton, NY, where he married Nancy Sovie. He attended and graduated from JCC. During that time he worked at The Clayton Bowling Alley, and also at The Bailey Family Farm, located on Eastline Road. He then became employeed at the Watertown Hydro Plant. In later years, after his divorce, he moved to California, working several jobs and then returning in 1984 to the North Country. He married Juliana A. Eames. At that time he returned to school and earned his RN degree, for which he was incredibly proud of. He was employed by Mercy Hospital, The Watertown Correction Facility, and then Gouverneur Correction Facility from where he retired in 2004.

Pat was an avid reader, always learning. He enjoyed "hobby" farming, gardening, and cooking and sharing his bounty with everyone, whether he knew you or not. He enjoyed educating himself on history, especially the Civil War, and loved traveling and seeing first hand where history was made. He enjoyed his daily visits with his Uncle Gordon Bailey on the farm. He spent time at the Clayton Gym, where he made many, "Gym Rat" friends. He was most proud of his children and their many accomplishments. Most of what Pat will be remembered for is his endless generosity, his eclectic story telling and the beautiful memories he made with so many people.

Besides his wife, Juilana A. Eames Moore, Patrick is survived by his three children, Dorean L. Moore-Sherwood, Vestal, Shawn P. Moore, Watertown, and Eric M. Moore and( Jamie L. Ruckdashel), Watertown; his only grandchild, Micheal C. Sherwood, Vestal. Also he is survived by Bob Sherwood, and Robert Vest Jr, for whom he thought as sons. In addition his is survived by Becky and Billy Ritz for whom he filled in as a father figure. His brothers, Michael Moore, KS and Dennis Moore, Ca., and many Uncles, Aunts, Cousins, Nieces, and Nephews.

He was predecesed by his parents, and brothers, Thomas and Keith Moore. Pat was a communicant of St. Mary's Church,a member of both Clayton American Legion Colon-Couch Post 821 and Hawn Memorial Library. Donations in his name may be made to St. Mary's Church, 521 James St.Clayton, NY 13624 or Hospice of Jefferson County, 1398 Gotham St., Watertown, NY 13601.