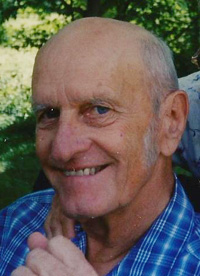 Mr. Weaver was born in Cape Vincent on November 2, 1928, son of the late Frederick J. and Geraldine Bakelaar Weaver. He graduated from Clayton Central School in 1946.

He married Marion A. Mott on May 12, 1951 in St. Mary's Rectory with Rev. George Racette officiating. They would have celebrated their 64th wedding anniversary on Tuesday the 12th.

Mr. Weaver served in the Army during the Korean War as a radio operator with the 4th Division, 22nd Infantry Regiment from 1950 to 1952. He retired on August 2, 1990 as a Maintenance Foreman with the New York State Department of Transportation after 43 years of service. He was an exempt member of the Clayton Fire Department , serving them for 26 years. Also, he was a life member of the Knights of Columbus Thousand Island Council 350 and was a communicant and volunteer at St. Mary's Church for many years. Since 1952 he had been a member of the American Legion Colon-Couch Post 821.

Mr. Weaver was a member of the Clayton Men's Twilight Golf League for 39 years and also a member of The Senior Men's Golf League. Besides golf he enjoyed hunting, fishing, gardening, bottle collecting, and family gatherings. He was a big New York Yankee and Syracuse sports fan.

The Funeral Mass will be celebrated on Saturday, May 16, at 12:00 PM at St. Mary's Church, Clayton with Rev. Arthur J. LaBaff, pastor, presiding followed by burial in St. Mary's Cemetery. The family invites everyone to a celebration of his life at the C-Way Restaurant from 1:30PM to 4:00PM after the cemetery.

In lieu of flowers, his family wished donations in his name to either Hospice of Jefferson County, 1398 Gotham St., Watertown, NY 13601 or to Clayton Volunteer Fire Department, 855 Graves St., Clayton, NY 13624.