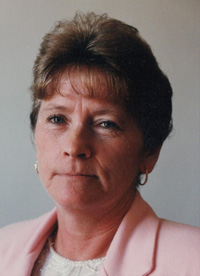 A Celebration of her Life will be held at the Paynter Senior Center, Clayton on Saturday, April 11, from noon to 4PM and on behalf of the family a prayer service will be spoken by Rev. Tom Augliano. Burial will be at the convenience of the family in Clayton Cemetery and arrangements are entrusted with Cummings Funeral Service, Inc., Clayton.

Barb was born in Watertown on April 15, 1948, the daughter of Clifford N. and Janet Martin Gould and she attended Lyme Central School.

She was a cook for many years at several local restaurants in Clayton. She was also employed at Gray's Wholesale and The B & D Meat Market in Clayton.

Barb was a member of several women's bowling leagues. She enjoyed camping, knitting, cooking, NASCAR, and especially spending time with her children and grandchildren.

She is survived by her six children and their spouses, Donald J. Jr. and Beth Fulmer, Suzanne M. and Scott Jackson, Amy Lou and Joseph Getman, Jamie J. and Tina Fulmer, and Todd A. and Valerie Fulmer, all of Clayton and Tammy L. Hunt, Tatum, TX; fifteen grandchildren and five great grandchildren, and one sister,Johanne "Dodie" Willett, Clayton; and several nieces, nephews, and cousins.

In lieu of flowers, the family wishes donations in Barbara's name to go to the Paynter Senior Center, 914 Strawberry Lane, Clayton N.Y., 13624.