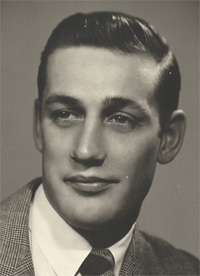 Rollin T. Gallagher, formerly of Smithville, passed away Good Friday, April 3, 2015, at Country Manor Nursing and Rehab Centre, Carthage where he had resided since October 11, 2013.

A Funeral Mass will be celebrated at Holy Family Church on Friday, April 10, at 11AM with Rev. Steven Murray, pastor, presiding and burial will follow in Glenwood Cemetery. There will be no calling hours and arrangements are entrusted to Cummings Funeral Service, Inc., Watertown.

Rollin was born in Watertown on June 24, 1927, the son of Edward and Marion Henderson Gallagher and he graduated from St. Francis De Sales School in Utica.

On June 14, 1945 he entered the US Navy and received the American Theater and World War II Victory Medals. Rolly was honorably discharged from active duty as a Seaman 2nd Class on July 25, 1946 and in 1950 from the Reserves.

Rollin worked for over 40 years as a bricklayer for Bricklayer & Allied Craft Workers Union Local #2. He was a former communicant of Holy Family Church and was a member of the American Legion Post 61, Knights of Columbus Council 350, and Bricklayers Union. He was an avid deer hunter and fisherman, belonging to several hunting clubs, including Handsome Pond Club, Tupper Lake. He enjoyed spending time in the Adirondack Mountains and at the family cottage on Point Peninsula. Rolly's true passion in life was the love for his wife and family. He was happiest when sharing stories with his siblings and surrounded by his family. He was a true Irishman who found great happiness in good conversation and hard physical work. He will be greatly missed.

He is survived by his five children, Brenda Lankford and husband, Robert, Perryville, MD, Robert and wife, Kathy, Point Peninsula, Erin Narrigan, Watertown, Steven and wife, Sue, Carthage, and Edward, address unknown; twelve grandchildren and nine great grandchildren; sister, Peg Higgenbotham and husband, Tom, Jacksonville, FL; and several nieces, nephews, and cousins. Along with his wife, Gloria, his three brothers, Robert of CA, Edward of Utica, and John of Watertown and his sister, Kay Brady of Watertown, died before him.