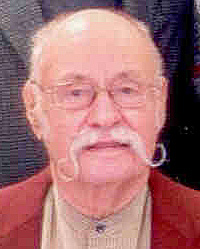 A Graveside Service will be held in Clayton Cemetery in the spring for Donn and his wife, Esther. There will be no calling hours and arrangements are entrusted to Cummings Funeral Service, Inc., Clayton.

Donn was born in Syracuse on May 3, 1924, son of Clinton Albert and Dorothy C. Severance Frickman. He was attending high school when he was drafted into the US Army on February 11, 1943. He served in northern and southern France, central Europe, Rhineland, Rome, and Arno. He received the American Campaign, Good Conduct, European African Middle Eastern Campaign, and World War II Victory Medals. On March 15, 1946 he was honorably discharged as a Corporal.

On April 3, 1948 he married Esther Gibbs, the love of his life, at Trinity Church, Syracuse and she died March 22, 2013. After his discharge from the Army, Curly worked for his father who had established the Jeff-Lewis News Service, distributing Syracuse and New York City newspapers in Jefferson and Lewis counties. After his father died in 1960, he built The Castle Drive-In which he and his wife ran for 28 years. After their retirement, they enjoyed volunteering at the Antique Boat Museum, traveling, ceramics, and especially spending time with their family. Donn was also a school bus driver for the 1000 Islands School System for 19 years. He was a member of Christ Episcopal Church and the Clayton Lions Club. On October 4, 2013 he and his grandson, Lance, went on an Honor Flight for local World War II veterans to Washington, DC which was sponsored by American Legion Colon-Couch Post 821 of which he was a member.

In lieu of flowers, the family wishes donations in Donn's name to either TIERS, PO Box 524, or to the Paynter Senior Center, 914 Strawberry Lane, both in Clayton, NY 13624.

Online condolences to his family may be made at at www.cummingsfuneral.com