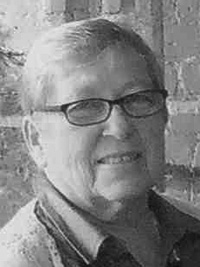 Joanne V. Maphey, 78, Flower Ave. W., Watertown passed away Wednesday afternoon, March 18, 2015, at her home with her family at her side.

Calling Hours will be on March 26, Thursday, from 4 - 6:30PM at Cummings Funeral Service, Inc., Watertown followed by a Prayer Service at 7PM at the funeral home. Burial in Riverside Cemetery, Wellesley Island will be in the spring.

Joanne was born in Syracuse on March 13, 1937, daughter of Karl and Kathryn Balling Viola. She graduated from St. Anthony’s Convent High School and Lemoyne College. In 1958, she married Philip A. Maphey, former Watertown City Judge. Judge Maphey, a partner at the Watertown law firm of Conboy, McKay, Bachman, and Kendall, died December 19, 1997.

Joanne moved to Watertown with her family in 1961. Early on, the family was active in Holy Family Parish, where Joanne taught church school. For many years, she and her husband were members of the “Celebration,” a church singing group at Holy Family. A number of friends from Holy Family went on to start “Credo,” a local drug and alcohol rehabilitation facility. Joanne volunteered and taught many the residents there for years.

When her children were older, Joanne obtained a Master’s Degree in School Counseling from St. Lawrence University. She was initially hired at the Jefferson County Committee on Alcoholism and helped develop the in-school program for Substance Abuse Prevention, known as “Project Charlie.” She moved with the Program to Jeff-Lewis BOCES, later becoming a Special Education School Counselor and traveling as an itinerant counselor to schools throughout Jefferson and Lewis Counties. She retired from BOCES in 1998.

Joanne and her family spent their summers at the family cottage in Charleston Lake, Canada and spent most of their winters downhill skiing at Dry Hill and Big Tupper Ski Areas, and on ski vacations with family and friends in the U.S. and Canada. Later, the family cottage moved to the St. Lawrence River, where, like so many others, they fell in love with the “River.” Joanne was proud of her involvement in the restoration of Densmore Church on Wellesley Island.

Joanne and her husband, Phil, loved to golf and travel together or with family and friends, creating memories that lasted their lifetimes. Joanne and Phil had a special love for one another. Try as she might, the remainder of her life without him was never the same.

Along with family, Joanne was cared for by her daughter, Mary, granddaughter, Kiley Hilyer, and Hospice of Jefferson County. At the time of her death, she was surrounded by her family, friends, and another love of her life, John Denver. Joanne is finally with Phil again and with the family and friends who went before her.

In lieu of flowers, the family wishes donations in her name to either Hospice of Jefferson County, 1398 Gotham St. or CREDO Community Center, 595 W. Main St., both in Watertown, NY 13601.